A woman of wisdom once told me to heed Paul Graham's advice to notice the things you can't say and then don't say them, which stance I'm updating slightly towards, because even when you're only making a perfectly reasonable point along the lines of Policy debates should not appear one-sided; I don't think that your Argument A actually supports Policy X (although I agree that X could be desireable for reasons independent of A) and everyone is charitable and no one bites, there's still a huge amount of emotional overhead incurred just by being in the conversation at all, because even when and you and your interlocutors are honest, you almost never have common knowledge of that honesty, so your interlocutors aren't necessarily sure that you're not just disagreeing with A out of secret enmity towards X, and you're not sure that they're sure that you're not, all of which drama is a drain on mental energy that could otherwise have been allocated to entirely grown-up concerns like JavaScript and money.

I am convinced, from many experiments, I could not study, to any degree of perfection, either mathematics, arithmetic, or algebra, without being a Deist, if not an Atheist.

Selfishness and altruism are positively correlated within individuals, for the obvious reason.

END_OF_DOCUMENT_TOKEN_TO_BE_REPLACED

Sunday 17 November 2013— This was the last week of App Academy's regular course content; the next cohort starts Monday and my cohort will begin the three-week "post-course" mostly focused on interview practice, applying for jobs, &c. I got Superscription into a non-embarassing state: I made the feed-fetching happen as a scheduled task, added guest users, introduced the ability to mark entries as having been read, made an attractive click-and-drag category selector, &c. I still want to—at the very least—implement infinite-scroll pagination (fetching all the unread entries from the start can be very slow if there are a lot of them) and rewrite the category selector's terrible, terrible code. On Friday a lot of my class went to the San Francisco Startup Job Fair at noon, and we also had our demo day at the office at three. I think I made an okay showing? But thanks for reading.

Why is it considered rude to reschedule an event after you've already sent out the invitations? Why do people stubbornly rejecting a compromise tend to do so in a polite and kindly manner? Why did you name your car Rainbow Dash? Speculative answers to these and other questions might be found in the following list of observations.

"We need some sort of slogan to go on our advertisements. Any ideas?"

"How about 'World's Best Widgets'?"

"Not ambitious enough?! How so?"

"What do you think of my website's new look? I designed it with ESS."

"No, ESS. I used genetic algorithms to 'breed' new designs until the pool of candidates settled down into equilibrium." 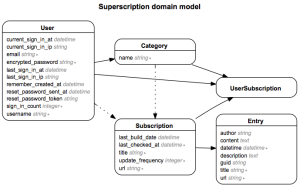