END_OF_DOCUMENT_TOKEN_TO_BE_REPLACED

Specific is terrific,
But meta is betta.

Tuesday 22 October 2013— I slept at the office last night for want of transportation, and ended up making some solid initial progress on a little Python web framework inspired by last week's class exercise, which I am also calling Wires. (Working on it in spare moments today alerted me to a disturbing deficit in my mental model of Python imports; you wouldn't expect organizing code into different directories to be difficult.) Yesterday I worked with Ryan Newton and today with Daphne Johnson on some JavaScript exercises.

Thursday 24 October 2013 (well, 0106 Friday)— Yesterday ("yesterday") I worked with Tommy Nast on a crude Asteroids clone using HTML canvas, and today ("today") I worked with Irene Zhou on a towers of Hanoi UI and started a Snake game using jQuery and DOM manipulation. I'm sleeping over at the office tonight, having spent the evening working on Wires.

You hear people accusing their enemies of being morally or intellectually bankrupt, and they mean it in the sense of "destitute of, or wholly lacking (something)", rather than the sense of financial insolvency. But I actually would like to see the insolvency metaphor: people should speak of declaring intellectual bankruptcy to mean "I was wrong before; I won't try to defend my previous claims because I can't" (in analogy to "I won't try to pay my debts, because I can't"). 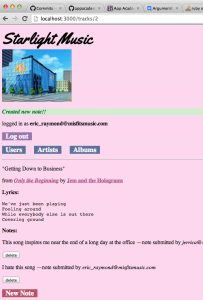 END_OF_DOCUMENT_TOKEN_TO_BE_REPLACED

"I shall seek? What's wrong with the original God grant me?"

"What God sees fit to grant me is one of the things I can't change."