Speaking of addiction, I suspect that relinquishing ideologically-induced moral outrage is actually harder than getting over many chemical dependencies (although I don't have any experience with the latter). At least with a drug, it's simple enough to draw a bright line around actions you're not supposed to do anymore; you can try pouring the contents of the liquor cabinet down the drain, or signing a commitment contract to not buy or borrow any more cigarettes.

But when one of your most strongly-held beliefs (strongly-held in the sense of emotional relevance, not actual probability; I'm very confident in the monotone sequence theorem, but the truth of its negation wouldn't be a blow to who I am) turns out to be false—or if it still seems true, but it turns out that being continually angry at a Society that disagrees isn't a good allocation of cognitive resources—what do you do then? Turning your life around from that isn't anything as straightforward as preventing specific chemicals from entering your body; you have to change the way you think, which is to say excise a part of your soul. Oh, it grows back—that's the point, really; you want to stop thinking non-useful thoughts in order to replace them with something better—but can you blame me for having a self-preservation instinct, even if my currently-existing self isn't something that ought to be preserved?

But then, blame or the lack thereof isn't the point.

Writers and mathematicians and programmers (&c.) can work on whatever they want with equipment that's easy for individuals to purchase. Architects and particle physicists and psychologists (&c.) need to hustle for clients or fill out a dozen grant applications just to be allowed to breathe—how do they bear it?

Someone needs to write a history of the entire world in terms of incentive systems and agents' attempts to game them. We have money to incentivize the production of useful goods and services, but we all know that there are lots of ways to make money that don't actually help anyone. Even in jobs that are actually useful, people spend a lot of their effort on trying to look like they're doing good work, rather than actually doing good work. And don't get me started about what passes for "education." (Seriously, don't.)

Much in a similar theme could be said about romance, and about economic systems in other places and times. And there's even a standpoint from which the things that we think are truly valuable for their own sake—wealth and happiness and true love, &c.—can be said to be the result of our species gaming the incentives that evolution built into us because they happened to promote inclusive genetic fitness in the ancestral environment.

The future is the same thing: superhuman artificial intelligence gaming the utility function we gave it, instead of the one we should have given it. Only there will be no one we'd recognize as a person to read or write that chapter.

Then the Dean understood what had puzzled him in Roark's manner.

"You know," he said, "You would sound much more convincing if you spoke as if you cared whether I agreed with you or not."

"That's true," said Roark. "I don't care whether you agree with me or not." He said it so simply that it did not sound defensive, it sounded like the statement of a fact which he noticed, puzzled, for the first time.

"You don't care what others think—which might be understandable. But you don't care even to make them think as you do?"

In this passage from Ayn Rand's The Fountainhead, fictional character Howard Roark demonstrates a very important skill that I really need to learn—that of emotional indifference to arbitrary people's opinions: not the mere immunity of "It's okay that people now disagree with the manifest rightness of my Cause, because I know the forces of Good will win in the end," but the kind of outright indifference that I feel about, let's say, the amount of precipitation in Copenhagen in March 1957. Someone disagrees with the manifest rightness of my Cause? Sure, whatever—hey, did you see the latest Questionable Content?

I say this purely for pragmatic reasons. There's nothing philosophically noble about being narrowly selfish, about devoting the full force of one's attention to questions like "What do I want to study?" or "How am I going to make money?" rather than "Why are my ideological enemies so evil, and what can be done to stop them?" So if there's no inherent reason why scholarship or business are more worthy than activism, why explicitly renounce the activist frame of mind?

END_OF_DOCUMENT_TOKEN_TO_BE_REPLACED

At some point, the first officer man should say, "When I was a little girl ..." and then everyone looks at him funny, and he says, "What, didn't I ever tell you that I'm trans?" Everyone else: "No!" "Oh. Well, now you know."

And then it never gets mentioned again.

I will not be rich; I will not be famous; who can say but that in a year's time, my desiccated corpse will be found abandoned in the most desolate of wastelands?—but! By the stars which may one day yet still be ours, I will understand!

Don't panic; keep it together; silently lower your estimate of your general competence.

If our sequence is bounded, the completeness of the reals ensures that it has a least upper bound, which we'll call, I don't know, B, but there have to be sequence elements arbitrarily close to (but not greater than) B, because if there weren't, then B couldn't be a least upper bound. So for whatever arbitrarily small ε, there's an N such that aN > B – ε, which implies that |aN – B| < ε, but if the sequence is nondecreasing, we also have |an – B| < ε for n ≥ N, which is what I've been trying to tell you—

—twice; suppose by way of contraposition that our sequence is not convergent. Then there exists an ε such that for all N, there exist m and n greater or equal to N, such that |am – an| is greater or equal to ε. Suppose it's monotone, without loss of generality nondecreasing; that implies that for all N, we can find n > m ≥ N such that an – am ≥ ε. Now suppose our sequence is bounded above by some bound B. However, we can actually describe an algorithm to find sequence points greater than B, thus showing that this alleged bound is really not a bound at all. Start at a1. We can find points later in the sequence that are separated from each other by at least ε, but if we do this ⌈(B – a1)/ε⌉ times, then we'll have found a sequence point greater than the alleged bound.

I don't enjoy being provoked into despising my fellow Americans for being alien savages, when it's so much better to just ignore them for the same reason.

For the haters are going to hate,
And the ponies are going to pwn,
As for me, I will bear all the burden and weight
And uncertainty of the alone.

Overdue book fines are a terrible sin, not because of the harm done to other library stakeholders, but because of what they say about you as a person: not only did you not get around to finishing the books you (apparently erroneously) thought you wanted to read, but you weren't even responsible enough to bring them back on time. 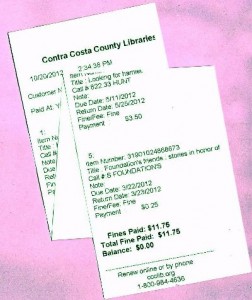 Dear reader, don't laugh: I had thought I already understood subsequences, but then it turned out that I was mistaken. I should have noticed the vague, unverbalized discomfort I felt about the subscripted-subscript notation, (ank). But really it shouldn't be confusing at all: as Bernd S. W. Schröder points out in his Mathematical Analysis: A Concise Introduction, it's just a function composition. If it helps (it helped me), say that (an) is mere syntactic sugar for a(n): ℕ → ℝ, a function from the naturals to the reals. And (ank) is just the composition a(n(k)), with n(k): ℕ → ℕ being a strictly increasing function from the naturals to the naturals.

Socially liberal,
Fiscally confused;
I don't know how to run a goddamned country,
And neither do you.