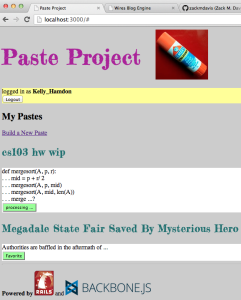 Thursday 31 October 2013 (or, very early Friday)— Speaking of online pastes, today I worked with Vincent Park on another make-a-Backbone-app exercise inspired by GitHub's Gist. It simply cannot be doubted that practice, as always, makes perfect. In the evening I bought a new clipboard at the Target inside the Metreon (as my old clipboard had been broken for some time, and the way in which the broken-off piece makes a great coaster had been small consolation indeed), and I hung out and made a few small improvements to Wires. I received a reminder of the importance of catching only specific exceptions—an except: block in my code was silently catching a type error that was the source of a bug, when really all I wanted was an except KeyError:—it was an easy fix this time, but in a larger project one might not be so lucky! Wires's current "template language" (if you can call it that; I'm just replacing identifiers inside "<%=" and "%>" delimiters with substitutions from a supplied dictionary) doesn't support conditionals the way EJS or ERB do, but it would be awfully nice to at least, say, render logged in as this-and-such depending on whether the user is logged in, but I have a cheap workaround in mind.