It turns out that there's a conceptually straightforward algorithm for solving the maximum flow problem, known as the Ford-Fulkerson method, which we'll implement in Ruby. But first, we'll want to pin down exactly how the flow network will be represented. Let's define an Edge class, each instance of which will be initialized with the names of the nodes at its head and tail, and the edge's maximum capacity:

And let's also make a FlowNetwork class, defined by the names of its source and sink nodes, and a hash which maps Edges to the amount of flow currently assigned to that Edge:

(Note that I haven't yet closed the FlowNetwork class definition yet, because we still want to define more methods implementing the Ford-Fulkerson algorithm!)

Of course, we need to specify exactly how to find these augmenting paths. This is a little bit more involved. It amounts to doing walking through the graph starting at the source, "labeling" nodes that could be part of an augmenting path, and scanning neighbors of labeled nodes looking for more labelable nodes, until we reach the sink (in which case we have found a path) or until we run out of nodes to scan (in which case there are no augmenting paths left). Sort of like this:

And of course, we also need code to actually augment the flow along the path found—

Then throw in a reporting method so we have some way of actually inspecting our network and its completed flow assignment, close the FlowNetwork class definition (at long last) ...

—and dear reader, the maximum-flow problem is solved! For suppose we are faced with the network depicted in the following diagram: 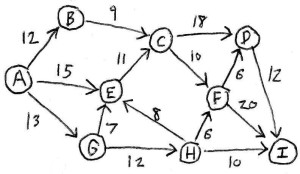 We can then (admittedly with some typing) call for a solution like so:

Anany Levitin, Introduction to the Design and Analysis of Algorithms, §10.2